It's all very well coming up with something unusual in the world of guitar design. Take a look at this one here: It's unlike anything this particular brand has done before.

Or this one, which—well, it seems just plain weird, on any level. But how were they justified by the people who designed them, and how did they fare in the marketplace?

Here we learn from five electric makers through the years about the inspiration for change and the mixed consequences of going against the grain.

National and a Fiberglass Body

In the early '60s, National in Chicago developed a series of guitars with Res-O-Glas molded hollow fiberglass bodies, which they thought would be more cost effective to make than traditional wooden ones. The new plastic models were the Glenwood, Val-Pro (later Newport), and Studio. The striking body of the Glenwoods and Newports was later nicknamed the "map shape," because it was (rather fancifully) said to resemble an outline of the United States.

Models such as the Glenwood 99 and the Newport 88 had a bridge-mounted pickup, as well as two regular pickups, and came with no fewer than seven knobs and a three-way selector. 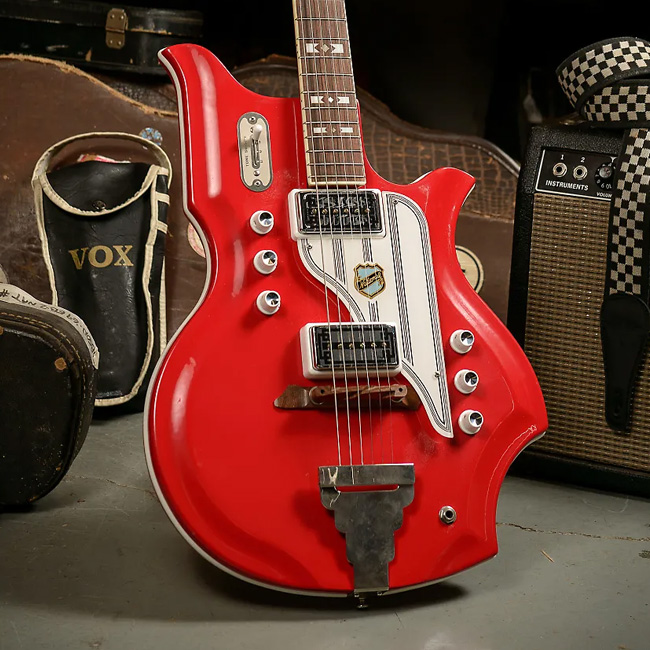 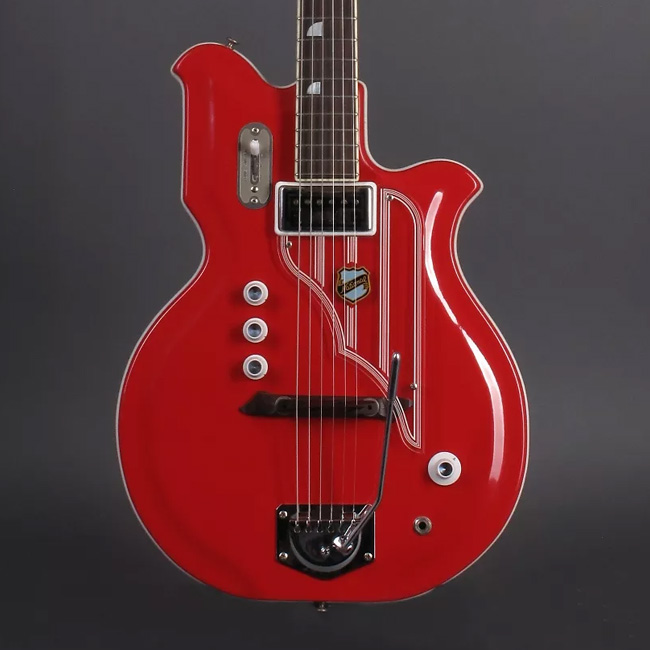 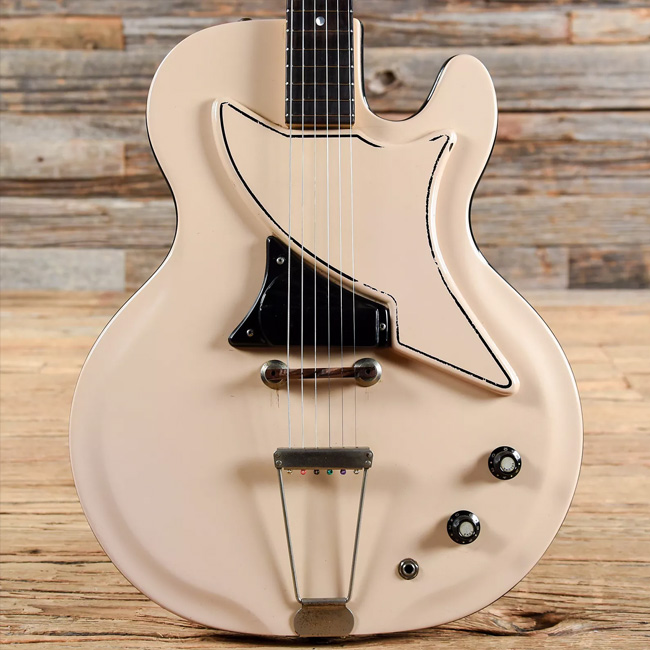 National's parent company, Valco, used fiberglass for other brands, too, including Supro and Montgomery Ward's mail-order Airline. There were also guitars with the unusual shapes but with conventional all-wood construction, such as National's Westwood models.

Valco boss Al Frost was convinced that plastic guitars were the future.

"In this age of true scientific progress," he said, "there are better ways to do things. Man-made materials now exist that actually are superior to those of nature alone. Products must work better, be more convenient to use, last longer, and be less subject to wear and damage in the service for which they were designed."

It turned out not to be so easy. The bodies had a tendency to develop cracks, and the process was messier and more time consuming than National had imagined. And by 1968, Valco had gone out of business anyway, taken down by an unwise purchase of the ailing Kay company.

Dean and a Matching Set of Cushions

Dean Zelinsky figured that Gibson was ignoring its heritage, and in 1976 at the age of 19 he set up Dean to make revised and enhanced versions of Gibson classics. 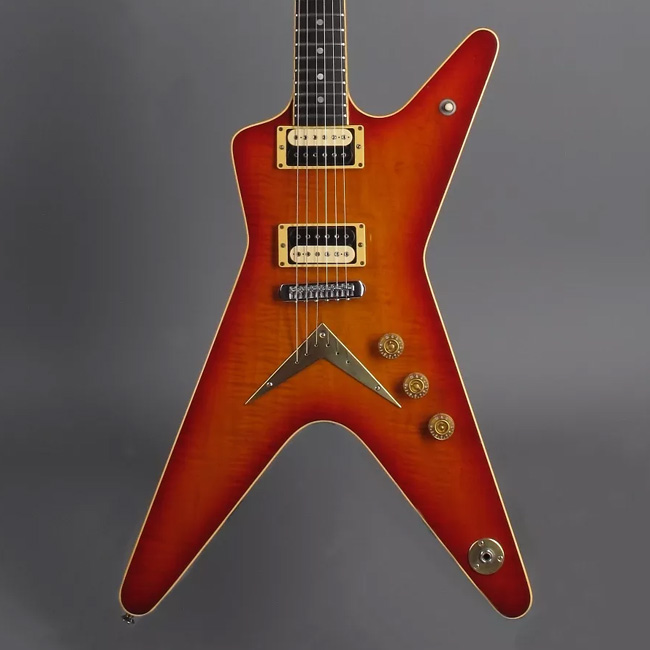 "You have to think back to where rock was in the late '70s," he says. "For me, Woodstock in '69 was the beginning of modern-day rock, and from there it started to get a bit more sophisticated. But while the music was getting progressive, and on stage they were wearing cool clothes and had these great light shows, it seemed funny that people were still playing un-flashy guitars designed in the '50s."

"I guess the carpet didn't match the cushions, you know? My whole concept," he explains, "was to bring along something sexy and stagey, where the guitar would become part of the look, and to put quality components on the guitar so that people would want to play it."

The first three Dean models were the V, Z, and ML. The V and Z were like a Flying V and an Explorer with a figured-wood top, but the ML had a new body design that simply and cleverly combined the two into a star-shaped creation, making it one of the pointiest guitars yet. Players such as Dimebag Darrell popularized the early Deans and helped establish the new brand among metal-leaning players.

Later, Zelinsky took a sabbatical away from Dean, returned in 2000, left in 2008 to set up DBZ, and then left there in 2012 to create the Dean Zelinsky brand that he runs today.

Fender and a Samurai Sword

Owner CBS sold Fender in 1985 to an investor group headed by the existing president, Bill Schultz. The historic Fullerton factory was not included in the sale, and this meant American production of Fenders stopped in February '85 while the new team hunted for a new building.

They had worked on two radical solidbody designs before the sale by CBS got under way, and both would become victims of the upheaval. The first was the Performer, which in some ways was Fender's "Super Strat" competitor, but the other was an even less Fender-like concoction, the Katana. Named for a samurai sword, it looked something like a one-legged Flying V. 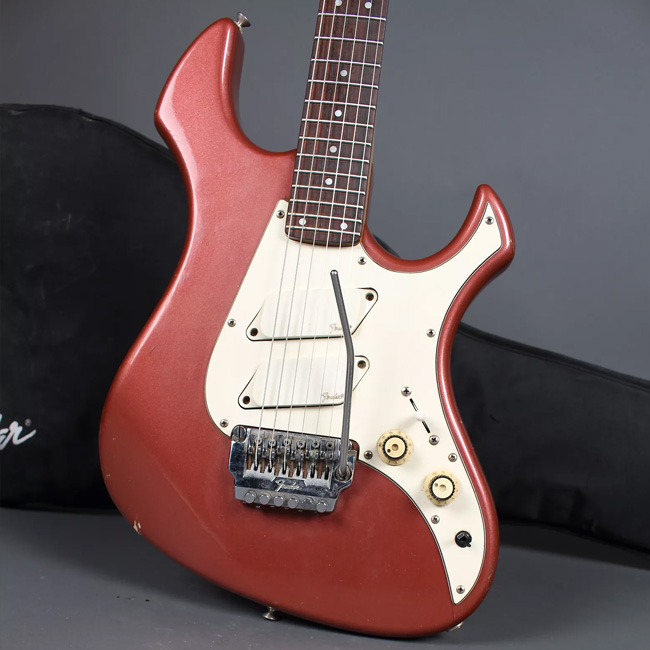 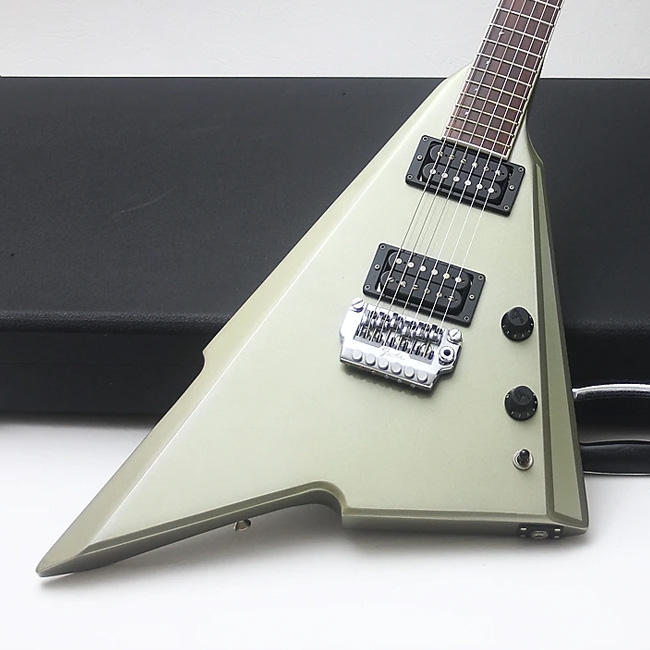 Introduced in 1985 with Fender or Squier brand and necessarily made in Japan like all Fender's guitars at the time, it marked a response to the fashion for unusual body shapes and the pressure from some dealers for Fender to devise its own pointy-body guitar.

Dan Smith at Fender remembered sitting down with his Mac's art program and messing around.

"I got to the point where I said yeah, this is as ugly as everybody else's," he said. "But the Katana was just too un-Fender for a lot of folks. It was hard for us to take the traditional Fender things and tweak them too far without people throwing up their arms. And in many ways that was our biggest asset and our biggest pain in the ass."

Most players resisted the styling and some the imposed Japanese production of the Katana, and like the Performer it lasted just a few years in the line.

Gibson and a Super Strat Trial

Gibson in the '80s saw Super Strats as a threat and tried to absorb some of the flavors that Jackson, Charvel, and others were successfully dispensing. An early attempt came with the US-1, introduced in 1986, which took the extended-Stratocaster style and gave it a balsa body core. Guitarists found it un-Gibson-like and it did not last long. 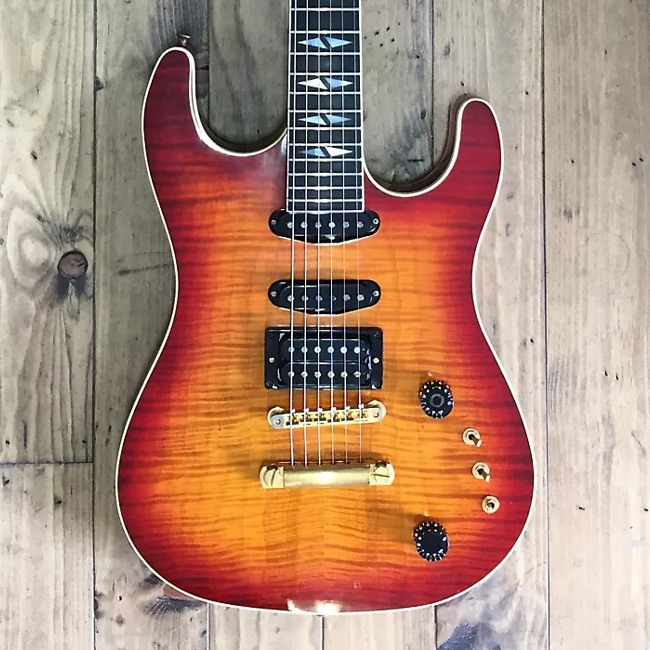 Next, the company added a splash of Super Strat features to a few of its existing models. Gibson mixed humbuckers and single-coils, bolted on locking vibratos, threw in some coil-tap switches, and added angular sets of position markers. The result was the 90 series of 1988, a set of guitars unquestionably of the '80s. They were designed by J.T. Riboloff, who Gibson had hired a year earlier.

"When I first came to Gibson, Jacksons were what was selling," Riboloff said. "The 'grandpa guitar' was not cutting it. I designed the whole 90 series—SG, Flying V, Explorer—to bring Gibson into this more modern thing, with a 25 1/2-inch scale, pearl inlays, real binding, and so on. I wanted to put Floyd Rose tremolos on them to begin with, but Gibson had acquired Steinberger, and Ned Steinberger had just developed the KB-X tremolo, so they used that. When they changed to the Floyd, they pulled the binding off the necks and fattened up the necks."

Gibson discovered again that guitarists wanted Gibsons from Gibson, and not superstrat wannabes. The 90 series lasted only until 1990 in the line, and the company's flirtation with this particular modern style was put to one side.

Malinoski and a Question of Art

Pete Malinoski began making guitars seriously in 2005 and today runs Malinoski Guitar near Washington D.C. Some of his instruments have been called art guitars, and Pete considers himself to be an artist as well as a guitar maker.

"I'm coming from the art end of the world, and there's a time when you're a novice artist and you copy other people's work to get some reps, to get some practice," he says. "But you get to the point where you don't copy people's paintings any more. Guitar makers, though, are stuck, mostly, just copying somebody else's stuff, retracing the same lines. I want to be as far away from that as possible." 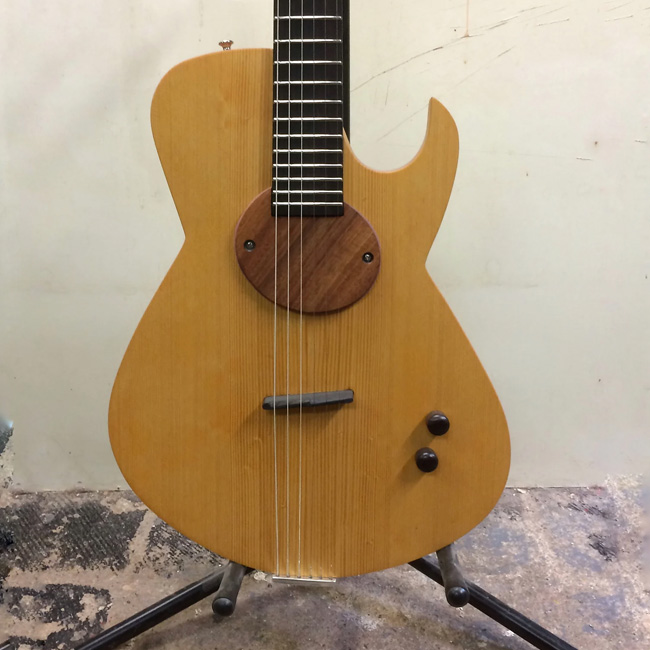 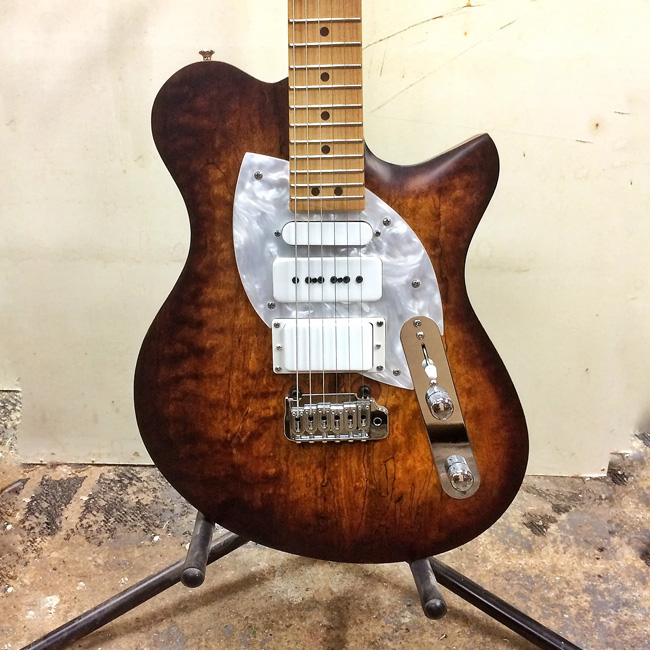 He may have had what he calls his trip to middle of the road with relatively normal models such as the Rodeo and Cosmic. But check out, for example, his Astro Logic. It's a gloriously fanciful concoction that the Jetsons might have played, mixing Velboa fake fur, drum wrap, maple, and Douglas fir. Pete says he intended to ride the line between craft, art, and funk.

"You want art?" he asks. "I'll show you what art is! And you're probably not going to like it. Like all good art, it challenges people and confuses them, and they feel dumb, and then they don't like it. That's kind of the typical reaction. Or it's the extreme opposite, the very educated, reverential part, the white gloves and 'don't touch it' thing. For me, though, the next challenge is: What do I do next? I have to keep coming up with another idea. I don't know what that is yet."

About the Author: Tony Bacon writes about musical instruments, musicians, and music. He is a co-founder of Backbeat UK and Jawbone Press. His books include Electric Guitars: Design And Invention, History Of The American Guitar, and Electric Guitars: The Illustrated Encyclopedia. Tony lives in Bristol, England. More info at tonybacon.co.uk.